We're not the favourites but we are among the hopefuls." Vicente del Bosque, Spain coach


The pre-quarters matches are here at the FIFA World Cup 2010. And the knock out stage start from today. Infact the first of the 8 matches is already underway. Its time to pick the favorites.. my heart sings for Argentina.. Messi in particular... but my calculations say it will be the Spaniards. Maradona's men will fall in the semi's hurdle. The best perfomance of Spain so far in the FIFA world cups is fourth place in 1950, but this time they will surprise the world. This worldcup has seen the domination of the Americas over Europe and other nations... So far, in the Eighteen editions, both these continents have shared equal honours winning 9 times each (different countries ofcourse). Brazil have won the World Cup a record five times, Italy have won four titles, and Germany are next with three titles. Uruguay and Argentina, with two titles each, and England and France, winning it one time each.
My prediction for 2010 - It will be Nederlands vs Spain in the finals with XAVI's men lifting the world cup on July 11th. The current Spanish team looks in good form... Villa's form so far in this South African edition has been good if not great, Iker's defence and XAVI's exuberance with the ball will be unstoppable. 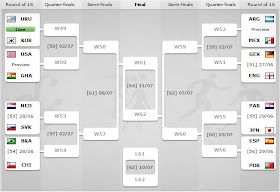